The unions in a circular jointly signed by the national president of SSANU, Muhammed Ibrahim, and the general secretary, Peters Adeyemi, said the strike has been extended by another one month to give the federal government more time to meet their demands.

SSANU and NASU had first commenced a two-week warning strike on 27 March 2022 citing the government’s nonchalant attitude in meeting their demands as a reason for the industrial action. The strike was extended by another two weeks upon the expiration of the first warning, as the union threatened to embark on an indefinite strike.

As the expiration of the warning strike by the Joint Action Committee (JAC) comprising the Non-Academic Staff Union of Educational and Associated Institutions (NASU) and the Senior Staff Association of Nigerian Universities (SSANU) draws near, the unions have concluded plans to embark on an indefinite strike if their demands are not met.

The spokesperson of JAC, Dr. Peters Adeyemi while responding to the press on Wednesday, April 13, said the union would proceed to an indefinite action after the two weeks extension of the ongoing warning strike elapses on April 24.

Adeyemi, however, gave conditions upon which their industrial action might be suspended, insisting that government should get rid of the Integrated Payroll and Personnel Information System (PPS), payment of the N30 billion Earned Allowances contained in the FGN/NASU and SSANU 2009 Agreements, among others.

He added that JAC resorted to embarking on the indefinite strike after writing over ten letters as a reminder to the federal government on the lingering issue, but never got any acknowledgment.

The Senior Staff Association of Nigerian Universities (SSANU) and the Non-Academic Staff Union of Universities and Allied Institutions (NASU) have embarked on a 2-weeks warning strike starting on Sunday, 27th March, 2022. See details below. 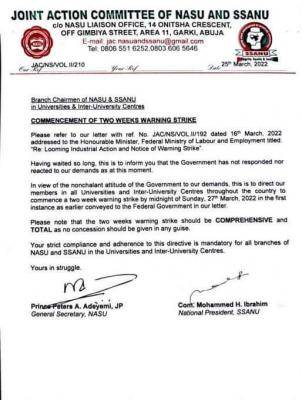 Please refer to our letter with ref. No. JAC/NS/VOL II/192 dated 16 March, 2022 addressed to the Honourable Minister, Federal Ministry of Labour and Employment titled “Re: Looming Industrial Action and Notice of Warning Strike”.

Having waited so long, this is to inform you that the Government has not responded nor reacted to our demands as at this moment.

In view of the nonchalant attitude of the Government to our demands, this is to direct our members in all Universities and Inter-University Centres throughout the country to commence a two week warning strike by midnight of Sunday, 27th March, 2022 in the first instance as earlier conveyed to the Federal Government in our letter.

Please note that the two weeks warning strike should be COMPREHENSIVE and TOTAL as no concession should be given in any guise.

Your strict compliance and adherence to this directive is mandatory for all branches of NASU and SSANU in the Universities and Inter-University Centres.

View all of Learnallpro's posts.