The ASUU OAU have declared an indefinite strike due to an unresolved allowance sharing formula.

A statement signed by the chairperson of the union, Dr. Adeola Egbedokun, noted that several engagement with some senior members of the university community have proved futile, hence the resolution to embark on strike. The following are the details: 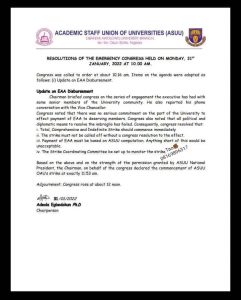 ASUU accused the university’s management, led by Eyitope Ogunbodede, of unduly delaying payment of the allowance, which they said had been deposited into the university’s account by the Nigerian government since December 13, 2021.

The decision was made at an emergency congress held on Monday morning at the First Bank Lecture Hall.

View all of Seyi's posts.